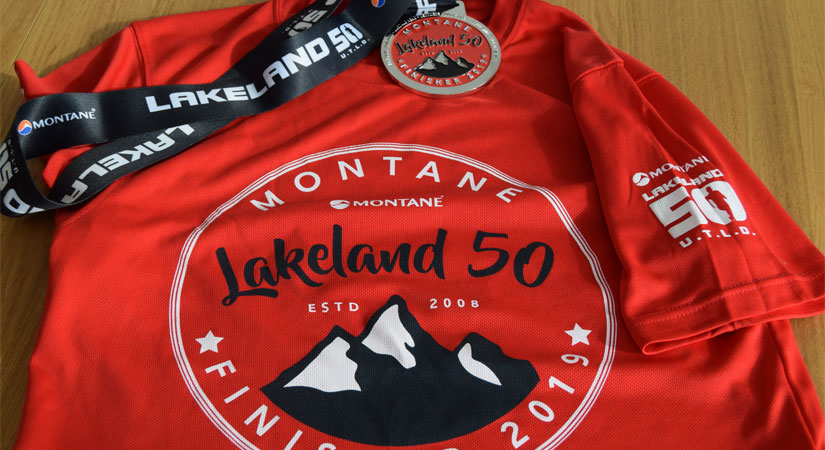 Firstly, it was emotional! What a weekend and what a race! But then it was with Help for Heroes Team True Spirit and it’s always a great experience with those guys!

What is the Lakeland 50?

The Lakeland 50 is one the greatest ultra trail challenges in Europe, perhaps the world. Source

The route starts from the Northern end of Ullswater within the grand Dalemain Estate before following the Eastern shore line as far as Howtown. A quick climb and descent followed by a trek along the banks of Haweswater sees you at Mardale Head. The route from here visits Long Sleddale, Kentmere, Ambleside, Langdale and Tilberthwaite before the final climb and descent to the finish at Coniston. It is a truly amazing route and you will visit places that you never knew existed, places which are ignored by the masses.

Approximately 3100m of climbing over the duration of the race. Here’s a great resource to see more about the race UK Hill Walking.

As those who know me will know, I love to challenge myself and also love to give back to charitable causes. This event gave me the chance to do both in one weekend.

I was volunteering with Help for Heroes Team True Spirit helping the beneficiaries of the charity around the course. To be honest it was that brutal they ended up helping me through it too! A real team effort!

It was brutal, a very tough race. I’m not sure what I had in mind but it certainly wasn’t as hard as it actually ended up being.

The rain was relentless, as soon as we went through the start line the heavens opened and didn’t stop for about 6 hours. Of course, running round the 4 mile loop at the start around the dalemain estate meant we didn’t stop to put our waterproofs on. First mistake of the day!

I was soaked to the bone from about half a mile into a 50 mile race which would see us running through the night and running up some of the big climbs in the Lake District National Park (Now a world heritage site). I was a bit worried about the fact that I was already soaking through; I’d not packed any spare clothing and only had the required kit.

Everything squeezed into my ultra running sack, I wasn’t racing and should have gone with a bigger sack with more kit in it.

We had a time limit of 24 hours to finish the 50 mile race; the 100 mile runners had 40 hours which sounded tough, whilst out there you realise just how tough that is! 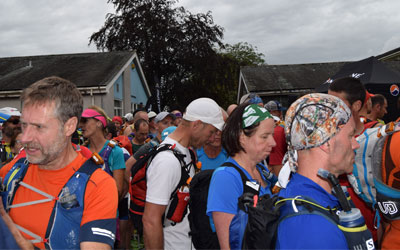 The first tester was the climb up Fusedale, it was still raining and once we got halfway to the top of the climb we entered the clouds which was pretty cool! Although, that did prevent us being able to see more than 10 metres in front of ourselves.

The good thing was there were lots of people in front and behind which meant we could just follow them! They knew the way didn’t they?!

With all the rain that had fallen it was a little boggy coming over high kop, but it didn’t stop us having a slow jog over.

We started descending towards Haweswater Reservoir; at first this was great fun. We had nice trails which made it a nice descent, having a bit of a jog.

Then it turned into a single file mud path and due to the rain and the number of people who had already passed through this section it was nothing more than a mudslide, I lost count of the amount of times I slipped and fell on this section.

It was not nice and I believe from one of the teams behind us that someone had actually fallen and broken a leg on the descent.

We hit Kentmere, the halfway mark, just before it started to get a bit dark. Nice boost was the Disney themed village hall where we could get soup, coffee and commando of the biscuit world Hobnobs!

Entering to the Frozen song, Let it Go, really nice reminder of home. My 2 year old sings this and it just reminded me of them. Nice when you’re going through a gruelling challenge to have those reminders.

Through the night we carried on through the Ambleside and Chapel Stile checkpoints, enjoying the nightlife in Ambleside as we walked through with head torches on. There were people falling out of the pubs, was nice to get a few claps and cheers as we were passing through.

Then onto Chapel Stile where we’d be treated to some beef stew! An amazing treat when you feel like your body is going to give up at any point. Then round Side Pike where it got a bit boggy again and hard to walk.

I was in a bad place from mile 35 through to around 40 miles, I had a lot of pain coming from my feet as I had developed a large blister on the sole of my foot which wasn’t the most pleasant thing in the world. I also just wanted to go to sleep!haha

From around mile 40 onwards I got a bit more of a spring in my step as the sun started coming up we could take the head torches off and knew each mile was another one closer to the 50 mile and Coniston mark where my tent was waiting for me!

The last big climb was left, It was the 4th highest climb on the entire route but it felt like a tiny one in comparison. Not sure whether this was tiredness creeping in or the fact it was light again and my body clock was enjoying being awake, but it was a great feeling climbing up Jacobs Ladder! There is a beautiful waterfall that the path crosses going up there, then it’s all downhill into Coniston.

That last few miles felt great! And the reception we got as a team as we entered the tent after the finish line was amazing!

Would I do it again?

If I had to answer this yesterday when I finished the race I would have said no, but after a night sleep and the fact my body doesn’t feel as bad as it did I’d say yes, bring it on!

We completed it in 21 hrs 15 mins which is a long time to be out in the rain but it was great to see the beneficiaries arriving back in and finishing a gruelling race together and with smiles on faces!